Ladakh, the Land of High Passes, wins hearts with its simplicity and rugged natural beauty. Spectacular landscapes, enfolded by serrated mountains, give the region its unique character. Largely influenced by Buddhism, Ladakh is home to numerous ornate monasteries. The pristine natural heritage of this fabled realm can be seen in its picturesque lakes, unspoilt by human civilisation. Showcasing an exotic character and cloaked in a transcendental aura, Ladakh is a destination, which is gaining immense popularity among globetrotters. Ladakh tour packages are opportunities that would take you to see a world, so serene and picture-perfect, that it would seem like a dreamland. Reaching Ladakh can be a little tricky due to the undulating quality of its terrain; however, it is accessible by various means of transport.
The main airport in the region is in Leh, its largest city. There are roads to access Ladakh for those, who would like to enjoy a drive. People can use National Highway 1D to come here from Srinagar or drive on the more popular Leh-Manali Highway. Ladakh has been bestowed with an abundance of natural wonders. Located in the north-eastern part of Ladakh, the Nubra Valley matches the ideals of scenic beauty. While availing Ladakh holiday packages, keep in mind they take you to some of the top tourist attractions like Hemis Monastery, Thiskey Monastery, Tso Moriri lake and Pangong Tso lake. If you are an adventure seeker, a trekking trip to the Zanskar Range should be in order. 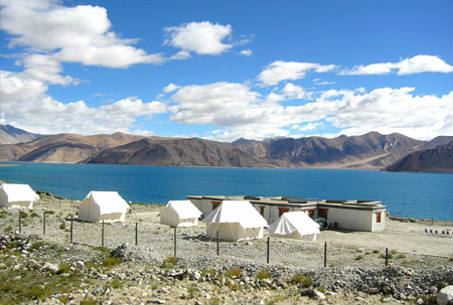 Ladakh in a Hurry - Ex Jammu